Abstract: The goal of second language teaching is to cultivate the learner’s ability to use the second language correctly, fluently and “decently”, though the latter often causes problems in terms of language registers. Whether in Teaching English as a second language or Chinese, researchers have found that learners have a tendency of using colloquial language in texts that should adapt a written language. In comparison to native speakers, the capabilities of using written language registers are insufficient, affecting beginners as much as advanced second language learners. This lecture will introduce relevant achievements and latest hot spots of the research of register acquisition in the field of teaching Chinese as a second language, and share some thoughts on the given topic.

The lecture will be held in Chinese language. 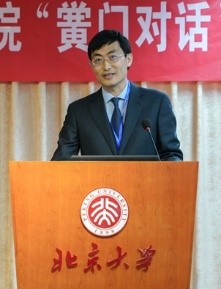 JI Chuanbo (Ph.D.) is professor of Applied Linguistics. Since July 2002, he has worked at the School of Chinese as a Second Language at Peking University. During this time, he has stayed as well at the Oxford University in the UK and the Ewha Women’s University in Korea. His research interests include Chinese language and grammar for second language teaching, research on the “three T’s” (teacher, textbook and teaching methods), and reports on the language situation in China. He has published more than 30 papers as well as a monography on “Study on the Emphatic Category and Some of Its Syntax”.