Andreas Guder studied German As A Foreign Language, Sinology, Linguistics and Intercultural Communication at Ludwig Maximilians University of Munich, Germany and Beijing University. After receiving his PhD (“Teaching Chinese Characters in CFL”) in 1998, he worked as lecturer for German language at Beijing Institute of Technology, PR China. 2003 he became Juniorprofessor for Chinese language and translation at Mainz University and is since 2004 until today elected president of FaCh (Chinese Language Teacher’s Association in German Speaking Countries) and co-editor of „CHUN – Chinesischunterricht“, the only scientific periodical on teaching and Learning Chinese As A Foreign Language in Europe.
From 2006 on, he worked as Head of Chinese language education at the Department of East Asian Studies at Freie Universität Berlin. Since 2016 he is Professor for Teaching Chinese As A Foreign Language (“Fachdidaktik Chinesisch”) at Göttingen University. 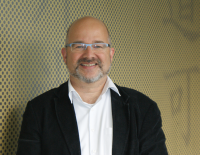