Conference Report: Conceptions of the World in Twentieth-Century Chinese Historiography

The rise of China at the turn of the twentieth-first century has had a crucial transformative impact on global economic and political order. From this background, scholars and policy makers have been debating how the political elites in China imagine this country’s future in a globalized world. Some historians look back into China’s rich legacy of historical writing from the twentieth century and even earlier, and attempt to make sense of how certain traditional concepts and transnational ideas together shaped the changing conceptions of the “world” in China.
On October 26 and 27, Göttingen University’s Centre for Modern East Asian Studies organized an international conference on the conceptions of the world in twentieth-century Chinese historiography in Göttingen, Germany. With the generous support of the Volkswagen Foundation and the Andrew Mellon Foundation as well as the Academic Confucius Institute Göttingen, a cohort of leading scholars from China, North America, and Europe discussed aspects of the topic and presented their own research. Using historiography as its primary field of inquiry, they investigated a variety of ways through which Chinese historians constructed and deconstructed temporal and spatial possibilities to place China in the globalizing world. In that manner, the workshop established an exchange between the field of China studies on one hand and global and transregional studies on the other hand, and it opened a dynamic dialogue for the continuous exploration of this topic. 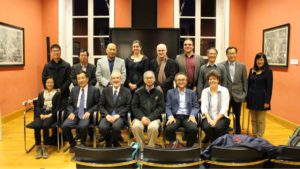 On October 26, Ge Zhaoguang (Fudan University) delivered a keynote speech on conceptions of the world in traditional Chinese historiography. He argued that, although world awareness was rare in China prior to the nineteenth century, three opportunities for critical change emerged due to the introduction of Buddhism in the Middle Period, changes in the international environment during the Song Dynasty, and the influence of Muslim world historical knowledge under the Mongol occupation. From elite politics to popular knowledge, he developed a bird’s-eye view and concluded that only after textbooks with knowledge about the world became common in the late Qing era did world awareness spread in Chinese society.
From an overview of traditional Chinese historiography, the panel discussions on October 27 moved to the twentieth century. Speakers on the first panel explored various ways in which Chinese intellectuals made sense of the world in the early twentieth century. Hon Tze-ki (City University of Hong Kong/SUNY Geneseo) discussed how the rise of print capitalism in Shanghai played a significant role in spreading knowledge about the world at the opening of the twentieth century. Julia Schneider (University of Göttingen) examined how eminent Chinese thinkers in the early twentieth century debated the nature of the Chinese nation through the lens of ethnicity. Kristin Stapleton showed how a lesser-known Sichuan writer, Li Zongwu李宗吾, creatively re-interpreted Confucian ethics in the context of coming world conflicts and invented “Thick-Black Studies.”
From newspapers and textbooks to popular literature, the two papers in the next panel returned to the professional study of history. Yet, they also raised new questions about the tension between localism, regionalism, and universalism in China’s world-historical tradition. Han Xiaorong (Hong Kong Polytechnic University) surveyed the state of Southeast Asian Studies in China and analyzed how the China-centered bias prevented the development of the field. Analyzing on the cases of Liu Yizheng 柳詒徵, Liang Qichao 梁啟超, and Liu Xianxin劉咸炘, Axel Schneider (University of Göttingen) delved into the epistemological challenges which some Chinese historians faced when turning to the field of universal history.
The linear view of world-historical development in Marxist historiography certainly affected Chinese conceptions of the world, which was the theme for the next panel. Fan Xin (SUNY Fredonia; Global Fellow in Göttingen) discussed how world historians in 1950s China adopted an ambiguous Marxist concept, the Asiatic Mode of Production, and struggled to propose an alternative, less Euro-centric path to global modernity for countries in the non-Western world. At the same time, as Liu Xiaoyuan (University of Virginia) demonstrated in his case study of Chinese communist leaders’ views of Tibet, these spatial concepts were by and large adopted to serve the geo-political concerns of the emerging communist state and open to various interpretations.
Chen Huaiyu (Arizona State University), in the next panel, spoke about the dynamic scholarly exchange between Chinese historians and their foreign counterparts in the early People’s Republic of China, which, he contended, led to the rise of “Asian History” as a new historiographical field of inquiry, providing an alternative to the Euro-centric world historical framework prior to the Cultural Revolution. Q. Edward Wang (Rowan University/Peking University), by contrast, analyzed how the rise of China as a new mighty global power affects the relationship between world history and Chinese history in this century. It seems to him that the flourishing of world-historical studies in China today might register a resurgence of nationalist discourse in the writing of history. Concluding the panel, Antoon De Baets (University of Groningen) discussed how historical writing has been used as a tool of resistance in totalitarian contexts. Surveying dozens of post-1945 examples from around the globe, he contended that, in the final analysis, historical analogies are templates for conversation, criticism and action under oppressive regimes, and that, if successful, they constitute small victories against autocratic power. They are sparks in the dark.
From archive-based historical research to question-driven intellectual and philosophical inquiries, the speakers in the conference adopted various approaches to the discussion on the changing Chinese worldview over the course of the twentieth century. Not only did they engage with past debates, as with Ge Zhaoguang’s reflection on Fairbank’s impact-response thesis, but they also posited new questions, especially from perspectives that have been neglected in previous scholarship. For example, some scholars have identified the significant role of popular culture in shaping modern identity in China and the necessity to reevaluate world-historical traditions in order to be able to reflect the nuanced changes in our views of the world. Thus, a continuous discussion based on even more diverse approaches is yet in order. Aside from the speakers, scholars from China, Europe, and America also attended the event. 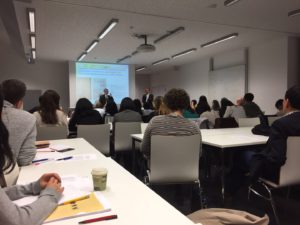 9:15 to 11:15 Panel I
Making Sense of China and the World During the Early 20th Century
Chair: Dominic Sachsenmaier (Göttingen University)

Liu, Xiaoyuan (University of Virginia)
Title: Tibet and Beijing’s View of the World

Chen, Huaiyu (Arizona State University)
Title: The Rise of the “Asian History” in Mainland China in the 1950s: A Global Perspective